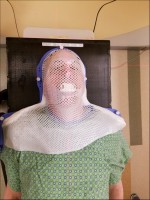 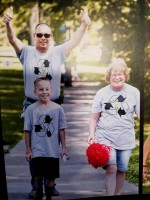 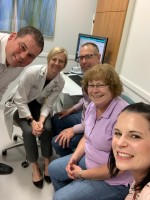 Welcome to Donald’s Carelines page! Thank you for coming to support Donald in his journey of recovery. Here you can:

Don’s journey with cancer began on January 29, 2016 when he was first diagnosed with Stage 4 Non-Hodgkin’s (Follicular) Lymphoma. The diagnosis came after several weeks of Don being too stubborn to get checked out by a doctor while trying to pass off his discolored skin tone, lack of energy and swelled legs and feet as a sinus infection (yeah right). The doctors initially though his conditions to be heart related. Our family was absolutely devastated after learning that Don had cancer and didn’t know what to expect or how long he would live at this point. All we could do was pray and rally around the most important man in our lives.

Don endured 6 months of intense Chemotherapy treatments until he was told that he was in partial remission in July, 2016. Our family was elated and couldn’t wait for life to gradually get back to normal.  The caveat was that Follicular Lymphoma would eventually return and it was only a matter of time until it came back again.

Over the next year and a half, Don worked hard every day to gain back his strength and grow back his hair! He gradually gained back his appetite, stamina and his routine of spending time with grandchildren, watching them play sports and going to church.

However, in January, 2018, we learned that his lymphoma had returned during a routine check-up.  While this was expected at some point, you can never prepare yourself to learn about a loved one having cancer. We were once again very concerned but confident that he would beat it again!

The second round of treatment was not as smooth as the first round. The oncologists tried 10 different chemotherapy drugs over the next 6 months. Don’s treatment was eventually moved to the University of MN cancer team to be treated by the best care team in the world at treating his particular form of cancer. This team of oncologists includes a team of specialists at the U of M who collaborate on a weekly basis about different options for each case. Every time a treatment failed, our confidence level began to fade. We were all starting to wonder about what the future would look like. Would our loving husband, father and grandfather be around much longer?  We couldn’t imagine life without him.

Then, in July, 2018 a brand new clinical trial called an Natural Killer (NK) Cell Transplant became available and Don was one of just a few  candidates nationally who would participate in this trial. Cheryl was a close donor match and gladly donated the cells needed to treat her dad.

Over the next 30 days, the family had to baby-sit Don at his house and take him to Oncology appointments to make sure his blood counts were getting back to normal.  Each of us grew a stronger individual bond with Don during this time. It became a special time that each one of us cherished. The end result of the NK Cell transplant was partial remission, but still some cancer still remained in his lymph nodes. At this point, Don was feeling pretty healthy. While progress was made, it was still a set-back knowing that he was not yet in full remission.

In September, 2018, Don had a successful, uneventful bone marrow Transplant. During the transplant itself, we ordered food, laughed and reflected on many fond memories our family had experienced over the years. However, a few days later is when the real challenges began. Don became too sick to eat, experienced several medical complications and received all kinds of different treatments that made him absolutely miserable for over a month. During that time, Don wasn’t himself, he seemed broken and we did everything we could to lift his spirits.

Eventually, things started to get better and he was able to go home to get “babysat” again by his family for the next three months. After a week, Don was rushed to the hospital by ambulance for a couple more weeks with complications called Grafts versus Host disease (which has varying degrees of severity). We thought we were becoming permanent residents of the U of M hospital. He eventually got to go home again. His blood counts would climb and drop, balanced by different medication and infusions over the next several months.

In January, 2019, we got the Great News that Don was once again CANCER FREE!!! The family celebrated, cried, laughed and thanked the lord!! Don worked back into a life of normalcy, one step at a time while still doing regular blood work at the U of M and dealing with different medical complications as they came up. The family did a Lymphoma walk together, where we wore shirts bearing the term “Lymphomaniac” and were able to raise over $1,000 for cancer research.

In June, 2019, the cancer came back a 3rd time. This time was less dramatic as the Oncologist took Don off the anti-rejection drugs that had been suppressing his immune system to prevent further complications. Within a few months, Don was cancer free once again without any treatment as his immune system knocked out the cancer on its own!!

Next, a whole new type of trouble set in. In September, 2019, Don lost his job of over 13 years. He loved his job and it was part of the motivation that he needed to keep him going during his cancer treatment, knowing his job was waiting for him. Not only did he lose the financial benefits but he lost his daily routine and the social aspect of so many co-workers that he considered to be friends. Don has been searching for a new job ever since. The unemployment rate was but the right job was hard to find.

While on the job search, he spent two weeks over Christmas and New Year’s in the hospital due to influenza, pneumonia and other issues. He recovered and moved forward, once again. Don’s unemployment benefits were ending in mid-March but he had two serious leads after having a couple of job interviews that looked promising.

Last week, Don’s routine oncologist appointment showed strong blood counts and good overall health. But, he was told that he had a cancerous tumor at the base of his tongue, a lymph node on his neck and possibly in his lungs (still awaiting results for the lungs). The oncologists assured us that it was curable and they weren’t overly concerned. However, he will need 6 months of chemotherapy and radiation treatments, eight hours per day / five days per week.

That day (last week), Don received a call with the job offer he had been waiting for. However, he was forced to turn it down due to the demands of his upcoming treatment, not to mention the risk of being considered “high risk” with the COVID-19 pandemic.

Don has so many reasons to continue fighting to beat cancer once and for all and we are all behind him in doing so!!

Send Donald a messsage of support