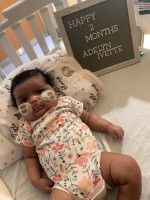 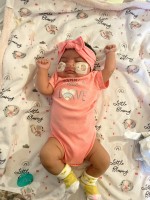 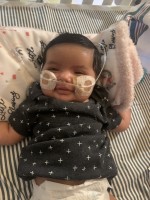 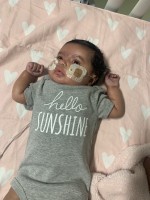 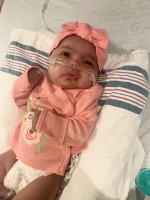 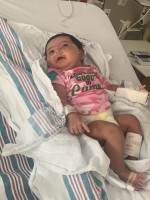 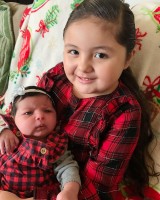 Welcome to Adelyn ’s Carelines page! Thank you for coming to support Adelyn in her journey of recovery. Here you can:

Our daughters name is Adelyn Ivette Rodriguez. She was born on December 7th, 2021. She seemed like a perfect and healthy baby, then a week later we got a call from her pediatrician. He told us that Adelyns newborn screening came back positive for an immunity problem. We searched and found out that most of the time these screenings produce false positives, so we were hopeful in that it was just a false positive. However after many more screenings and tests, a specialist confirmed to us, that Adelyns body was not making any white blood cells, what they call T cells and B cells. What that meant was that she doesn't have a working immmune system. Ultimately diagnosing her with SCID, Severe combined Immunodeficiency. Her form of scid is called ADA-scid, which is a form in which her body is missing a certain enzyme called ADA. After the confirmation, we were sent to a near by children's hospital for Adelyn to be given a treatment called IVIG. What IVIG does is give her a boost in antibodies, to be able to prevent any infections that she wouldn't be able to fight off. Two days later were flown to university hospital in San Antonio Texas where genetic testing was done on Adelyn to find out what type of SCID she had.  After about a week there, we were transferred across the street to Methodist children's hospital to be admitted to the bone marrow transplant center. Since then, which was January 13th, 2022, we have been here with our daughter awaiting for the day which will ultimately be her transplant. Until then, they are constantly doing blood work and giving her medicines to help prevent any infections in the mean time. Ultimately our family has been split apart, we are having to be here with our newborn but our 5 year old is back home with family 4 hours away. We anticipate a long stay in the hospital and we miss her deeply. My husband has since stopped working, However we take this day by day, and have faith everything will be ok. This diagnosis was never part of our plan but we stand by our baby girl with faith everyday till the day she is able to go home.:)

Send Adelyn a messsage of support

“..Thank you for your help and support.”

$
$51.50
Raised
$10
Goal
Adelyn 's latest journal entry
2.8.22
Hello ! This is Adelyns momma, currently don't have much new news. However a little update I can give is that of the results of our HLA testing to see if myself, Leo (my husband) and Jocelyn (Adelyns big sis),...
Read more