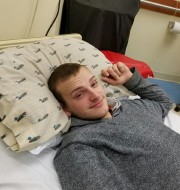 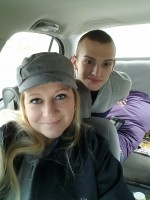 Welcome to Christopher’s Carelines page! Thank you for coming to support Christopher in journey of recovery. Here you can:

After completing treatment for Hodgkin lymphoma in 2014, Christopher Morrison did not want anything to do with hospitals, needles, or chemo.  However, after experiencing hip pain and worsening night sweats, Chris was diagnosed with relapsed Hodgkin lymphoma in May of 2016. After countless chemotherapy treatments, transfusions, and radiation treatments, Chris received an autologous bone marrow transplant on January 20, 2017.

Chris’s mother, Amy Johnson, is his full-time caregiver. She drives Chris to and from his daily appointments to the James Graham Brown Cancer Center and University of Louisville Hospital from Springfield, KY, a 120 mile round trip. Prior to his diagnosis, Chris and his mother were students at the local community college.  Once it became clear that Chris would require a bone marrow transplant to cure his disease, Amy and Chris placed their education on hold. Amy began picking up night shifts as a correctional officer to make ends meet while still looking after Chris during the day. Amy also provides caregiver support for her mother, who was recently diagnosed with stage III lung cancer.

As she will not have any income upon Chris’s discharge from the hospital, Amy is increasingly concerned about her ability to pay her mortgage and other monthly expenses while she provides caregiver support for her son. Furthermore, continuous trips to and from the Cancer Center, as well as the added expense of living in Louisville for several months, have placed a tremendous financial burden on Chris and his mother. We appreciate your kind consideration for patient aid to be used for fuel, mortgage payments, and other treatment related costs as Chris continues to recover from his transplant.