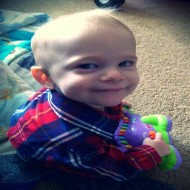 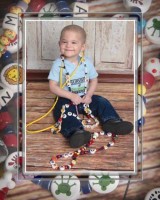 Welcome to Dalton’s Carelines page! Thank you for coming to support Dalton in journey of recovery. Here you can:

Dalton had his transplant on December 13, 2013. Although he went through some complications post transplant and spent some time in the PICU, Dalton is doing well. Dalton and his family are thankful for his continued recovery. They are even thankful for his first play-inflicted ouchie from being wild outside, because it is just another physical sign that he is a wild, crazy, ruff-and-tough toddler, a NORMAL toddler.

To help Dalton and his family afford the continued medical expenses associated with his bone marrow transplant they have set up this special One to One Fund. They are extremely thankful for any donations and support that helps them during this transplant journey.

Dalton Peter Reno was born on September 15th, 2012 weighing 6lbs 1oz. He was small, but seemed perfectly healthy until he broke out in a horrible rash at eight weeks old. He was diagnosed with eczema, an itchy inflammation of the skin, and constantly experienced skin and bacterial infections. Dalton also had multiple complete blood count (CBC) tests, which came back showing a low white blood cell count, but doctors attributed the CBC results and continued rashes to the eczema.

In order to get a better indication of abnormalities that may exist, Dalton underwent more blood work and a differential count. They discovered he had severe neutropenia, an abnormally low count of neutrophils, which is a type of white blood cell that helps fight off infections. The lower your neutrophil count, the more vulnerable you are to infectious diseases, and Dalton had zero neutrophils. He was rushed to Doernbecher Children’s Hospital at OHSU and they did a bone marrow biopsy to find the cause.

They were shocked by the findings. Dalton was diagnosed with severe combined immunodeficiency (SCID), a group of very rare-and potentially fatal-inherited disorders related to the immune system. At the time of diagnosis, Dalton was 11 months old and the doctors were amazed he made it that far with no life-threatening illnesses. His parents call him their miracle baby.