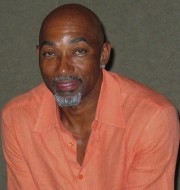 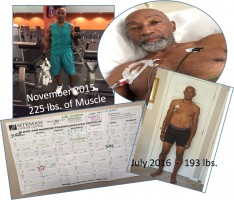 Welcome to Gregory’s Carelines page! Thank you for coming to support Gregory in journey of recovery. Here you can:

On Feb. 24, 2016, at age 57, I was diagnosed with AMYLOIDOSIS, I am a world class athlete who ran on a professional level for 17 years.  I was ranked in the top 7 in the World for 16 years.  Since retirement I’ve maintained my athletic form.  Two years ago I started having shortness of breath.   I contacted my doctor and because heart failure runs in my family he immediately scheduled me for an EKG and a stress EKG, the initial findings showed that there was thickening of my heart muscles.  The doctors attributed it to my being an athlete for so many years.  They called it, “Athlete’s Heart”.  I was told there was nothing to worry about.   Although I continued to have symptoms and discomfort, I continued with my usual activities.

In Nov. 2015 I began to have severe stomach ache and shortness of breath.  I went to the emergency room and was admitted for 2 days.  I had another EKG and blood work done with little results.  The tests showed elevated protein in my heart, kidneys and liver but doctors weren’t alarmed. Still unsure of the cause, while hospitalized I saw several cardiologists. I also saw a hematologist and was told there were no abnormalities. I left the hospital again with no answers. I was told, “There’s something, but we’re not sure what.”  Following that hospital stay I was scheduled for a Cardio Cath, a heart MRI and more blood tests.

On Jan. 1, 2106 I woke up with swelling in my lower legs and shortness of breath.  After elevating my feet it went down slightly.  After 3-4 weeks of swelling and not being able to wear shoes comfortably, I called my doctor.  While in his office he checked my swelling and he noticed my elevated heart rate. He had me walk around his office with a heart monitor on. While walking my heart rate escalated tremendously and he immediately had me hospitalized, I was in heart failure.  While in the hospital they put me on IV Lasix for the fluid retention and in 12 hours my weight went from 230 to 211.  After another EKG and more testing there were still no answers.   I was released and told that I’d be scheduled for a heart biopsy.

After 10 days, Dr. Nash informed me that I had Cardio Myopathy. It was something more serious than Athletes Heart.  Dr. Nash ordered a complete battery of blood tests, a fat pad biopsy and a bone marrow biopsy.

After a week of waiting for the results, the Mayo Clinic revealed, I had AL AMYLOIDOSIS.  After researching this disease, I was immediately devastated because THERE IS NO CURE.  Until further research I thought it was a sure death sentence.

My medical team informed me, I would undergo chemotherapy and a Hematopoietic Cell Transplantation (HCT) transplant. Although there is no cure the goal is to destroy and stop the growth of the bad plasma cells with the hope of reversing the damage to my heart.  I had chemo on June 13th and the Hematopoietic Cell Transplantation (HCT) transplant on June 15th, I was hospitalized for over 2 weeks and since returning home it’s been difficult.  I still experience shortness of breath, tightness in my chest, swelling in my legs and feet, nausea, weakness and fatigue.

During this 2 year process working has been tough.  This has been a tremendous stress on me mentally, physically and financially. About a year ago I had to give up my profession of managing athletes and coaching, because there is a great deal of travel associated with such a career. With mounting medical costs and day to day expenses I started substitute teaching but this doesn’t pay enough to keep up and it’s not consistent work. Going forward I’m not sure what the future holds, but for now I am unable to work and I have been making ends meet with the help of family and friends. If it were not for loved one’s generosity my survival would be challenging at best. This journey has been one of great disparity. Although this fight sometimes knocks me down both mentally and physically, I get up and continue to fight.