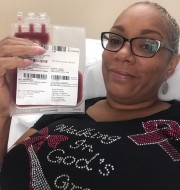 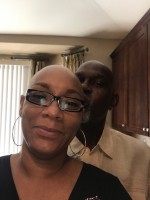 Welcome to Joanne’s Carelines page! Thank you for coming to support Joanne in journey of recovery. Here you can:

Thank you for visiting my One-to-One Fund.

the Bone Marrow & Cancer Foundation’s One-to-One Funds are designed to support patients through this difficult transplant journey.  Thank you in advance for your support.  All gifts are tax deductible.

Any size monetary donations are welcome and highly appreciated towards my current and future medical bills. You may also qualify for employer matching funds grants by using “the Bone Marrow & Cancer Foundation ID # 133674198”. As of now there is NO cure for Myeloma.You will be providing me the ultimate gift of helping me to continue to fight this battle for the rest of my life. I want to Thank you in advance for your future blessing that you bestow upon me.

I sincerely pray that my story will someday help someone else that is going through a difficult time battling cancer.

On Sept 23, 2016 I flew to Chicago from Arizona to attend a prayer dinner for my best friend that was waiting on a liver transplant. Three weeks prior to attending the event  I was experiencing neck pain and I thought the pain was connected to a car accident I was involved in back in 2015 so I didn't think much about it.

The pain started becoming so unbearable on the evening of Sept 25, 2016 that it felt like my neck was separating from my body. I should have went to the ER then but of course I thought the pain would ease up the following day.

The next day on Sept 26, 2016 we were scheduled to fly home but I couldn't get out of bed or walk without assistance. My dad immediatly call 911. When the ambulance came the medic immediately put a neck brace on my neck. While rolling me out the door I was literally screaming because of the excruciating pain.

While at the hospital I went for Xrays, then a MRI. I thought it would be a simple fix so I told my dad to drop my husband and daughter off at the airport so she wouldn't miss school. I assumed I would be on the next flight available after being released.  When my family left the hospital I was there alone waiting on the doctor to tell me what's going on. All of a sudden the staff rushed over immediatly laying me flat on a board telling me to lay still as possible. I instantly got scared and nervouse. Seconds later the emergency room doctor said there was a large mass that ate a hole on my C2 bone and the mass appears to be Cancer. I just started crying. I was alone and scared. I call my dad and he had already dropped my husband and daughter off. I called my husband hysterical telling him what the doctor said. He wanted to turn around and come back but I told him that I didn't want our daughter to miss school because its her senior year.

Needless to say I stayed in Christ hospital for 8 days treating the pain and I also recieved a bone marrow biopsy. I was told by oncologist Dr. Charr that I have a disease called Multiple Myeloma which is a form of a blood Cancer that affects the bones. He explained that I would need a bone marrow transplant to rid the disease temporarily and I may also need more transplants down the road. Once released I had 16 weeks of outpatient radiation at South Suburban Cancer Center.

I was literally in Chicago a little over 2 months treating the Myeloma. It was hard being away from my family that long. My daughter was in her senior year of highschool and she struggled in school immensely because of my prognosis.

I was released from Advocate Health Care and returned home on Dec 4, 2016 and transitioned to Cancer Treatment Center of America in GoodYear AZ where I'm currently under the care of oncologist Dr. Tan recieving Chemo until June 2017.

May 12, 2017 my daughter Jalisa graduated highschool. I Thank God she made it considering she struggled,and cried a lot after learning I had Cancer.

June 23,2017 I transitioned to Virginia G Piper Cancer Center for a Bone Marrow transplant. My cells were extracted and froze until transplant day. I recieved the transplant on Aug 11, 2017 and now I'm recovering. I also transitioned back to CTCA 10/12/2017.

This has been really tough on me and my family physically and mentally. I'm still waiting on those magic words REMISSION and I know in my heart it will happen. Even thought there is no cure I will NOT give up fighting.

Throughout everything I kept the faith that God will carry me through with a smile and a great attitude. God has helped me tremendously and I'm forever grateful for the power of prayer from family, friends, and people I do not know personally.