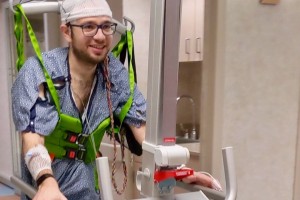 Welcome to Joshua’s Carelines page! Thank you for coming to support Joshua in his journey of recovery. Here you can:

Joshua Koch is 29 years old and has suffered from Dysautonomia (a condition in which the body’s automatic systems, such as blood pressure, heart rate, circulation, and digestion cease to function properly), since he was a teenager. In spite of frequent bouts of weakness, dizziness, and fatigue, Josh was nevertheless able to graduate college, build a business, and follow his passion for travel. But after a trip to Thailand, everything changed.

In Thailand, Josh suffered an infectious fever of unknown origin, and was hospitalized. When he arrived home to Pennsylvania, his health dramatically deteriorated. Josh has now lost over 40 pounds and continues to lose weight; he loses consciousness often; he has repeated seizures, sometimes 9 or more per day; he has periods of delirium in which he doesn’t know who, or where, he is.

Since May 2019, Josh and his mother, Lillian, have been shuttling between Mayo Clinics in Minnesota and Arizona, without finding a clear cause for Josh’s complex problems, which have now rendered him completely disabled. In order not to lose consciousness, Josh must spend most of his waking hours lying flat, which has led to severe muscular atrophy. Digestive failure due to autonomic dysfunction has rendered him unable to consume solid foods. Seizures and periods of delirium force ER trips several times per week. This formerly active young man now spends nearly all of his time either in bed, or in a wheelchair. So far, the only course of action recommended by top physicians is to try various difficult treatment regimens in the hope that one might restore his health, and return his independence. Recovery could take months, or even years.

Josh is currently unable to work, or care for himself. Due to the frequency of seizures, Josh cannot currently even be left unattended. Family members have taken turns leaving their own jobs in order to help. Once home, Josh will need 24-hour care, and extensive rehabilitation, much of it not covered by insurance. Josh and his family have borne enormous expenses by themselves so far, and are now reaching out to ask friends, relatives, and their community for help. Josh is determined to do whatever is necessary to regain his health, but it’s going to be a long road. We thank you with all our hearts for whatever help you can give.

Send Joshua a messsage of support

$
$12330.00
Raised
$150000
Goal
Joshua's latest journal entry
November 8, 2019
We are still in Baltimore seeing specialists and having many, many tests. Just met with the 2nd neurosurgeon to tell us that Josh has C1 & C2 instability (first and second discs in his C spine), also called AAI. This...
Read more