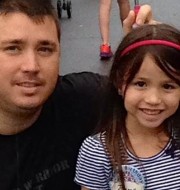 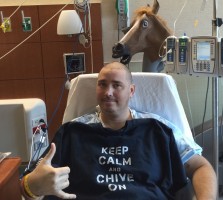 Welcome to Justin’s Carelines page! Thank you for coming to support Justin in journey of recovery. Here you can:

As mentioned below, Justin had his transplant this past April. Currently he is still batteling graft vs host disease (GVHD). The GVHD is affecting his liver and entire digestive track. Read more about his transplant journey below. Thank you for visiting Justin's page.

Justin has been a member of the US Navy for over 8 years. He is an Eagle Scout and Assistant Scoutmaster of a local Boy Scout Troop. Justin is involved with helping others in any way he can, and is more interested in helping others then himself. He has an eight year old daughter, Emma, who as you can imagine is his world.

Justin was diagnosed with Acute Myeloid Leukemia (AML) in June of 2014. He was told by the medical community that he had the flu, pneumonia, bacterial infection, and other common illnesses, before he was properly diagnosed. It wasn’t until a friend in his Naval unit said he didn’t look good at all and that he needed to go back to the doctor did Justin think something was out of the ordinary. Instead of proceeding to chow that day, Justin went to the Naval clinic onboard NAS Jacksonville. It was there he was told he had to go to his civilian doctor; as he was in the reserves. Justin then proceeded to his civilian doctor who ordered a blood test, “just in case” as described before. He was still sick after being treated for the aforementioned illnesses. However, the civilian doctor’s office lab was down for the day, so Justin had to go to the nearest ER. Immediately after the initial blood test the ER staff was amazed he drove himself to the hospital, because by his blood counts he shouldn’t have been able to move, much less be a functioning human being. He was immediately transferred to another hospital for an in depth evaluation and was woken up in the middle of the night to be told he has Leukemia.

Justin has been in and out of treatment including in-patient chemotherapy and an allogeneic, unrelated bone marrow transplant. Luckily, there was a single match for Justin’s bone marrow type and they were in Germany. The gracious individual immediately started the donation process and the donor’s bone marrow was on the next flight from Germany to Jacksonville, Florida. Justin received his new bone marrow on 15 April 2016.

The recovery has not been the easiest for Justin, as he has battled GvHD, graft versus host disease, three times. The first time Justin lost his gall bladder and this most recent time, which he is currently fighting, is attacking his liver and digestive tract. Every time Justin eats, blisters form in his mouth and causes so much pain that he cries. If you ask him though, he won’t admit it. Our brother is the strongest person any of us has ever known. He maintains a positive attitude, even though we know he is having the hardest time of his life.

We appreciate your time and thank you for visiting Justin’s page. If you can help Justin and his family out, by providing even the tiniest of donations, we will be eternally grateful. The donations will be used to assist with the medical, travel, and daily living expenses that become mountainous when a patient is unable to work. You will help alleviate the financial burden and let him focus on fighting the ultimate of fights!

the Bone Marrow & Cancer Foundation’s One-to-One Funds are designed to support patients through this difficult transplant journey. Thank you in advance for your support. All gifts are tax deductible.

The Loving Family of Justin Lewis,

And if you would like to learn more about AML, please visit: http://www.cancer.org/cancer/leukemia-acutemyeloidaml/