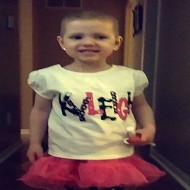 Welcome to Kyleigh’s Carelines page! Thank you for coming to support Kyleigh in journey of recovery. Here you can:

Kyleigh had just turned two when she was diagnosed with stage 4 neuroblastoma. In October 2014, at the age of three, she received an autologous Hematopoietic Cell Transplantation (HCT) transplant to treat her disease.

After the transplant, Kyleigh was hospitalized for two months. The process has been difficult on Kyleigh’s entire family. Her mother, Adrienne, is unable to work because of Kyleigh’s intensive medical needs. Her father, Adam, had to take unpaid leave from his job in order to help care for Kyleigh’s brothers, a five-year-old and one-year-old, during the two months that she was hospitalized. The hospital was two hours from the Phillips’ home, so keeping the family all together was a struggle.

On February 6, 2015, the Phillips’ learned that Kyleigh’s cancer returned in her bones. As of now, doctors are telling Adam and Adrienne that there is no cure for Kyleigh’s condition. Adrienne describes this whole experience as a “roller coaster”. It has been hard watching their little girl undergo such great medical obstacles when she does not understand what is going on.

The Phillips’ are in need of financial assistance in order to assist with costly medical bills, as well as with living expenses that piled up due to the loss of income during Kyleigh’s hospitalization. In order to meet these needs, they have teamed up with the Bone Marrow & Cancer Foundation to raise funds through a One-to- One account. Thank you in advance for any contributions you can make.