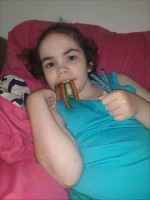 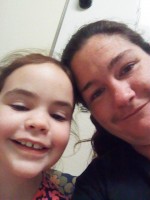 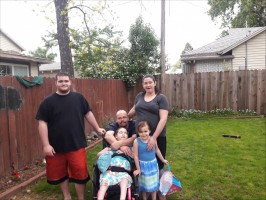 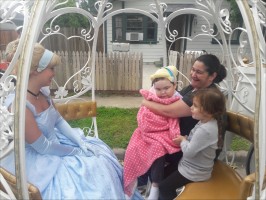 Welcome to Rachel’s Carelines page! Thank you for coming to support Rachel in her journey of recovery. Here you can:

Rachel was always a very happy and energetic little girl she was also very loving and considerate of others feelings. On march 16 2016 Rachel was diagnosed with metochromatic leukodystrophy a white matter disorder that would quickly take all her motor functions, speech and memory before she became a vegetable and passed. We were told there was no cure and she would be gone in just a few years. We then found out there was a treatment that would completely cure her called Gene Therapy created by Dr. Alessandra Biffi at Boston children's hospital. We then took all the money we had and flew from California to Boston to meet with Dr. Biffi she asked Rachel a few questions then told us that Rachel had progressed to far and she would not help her. We were told to accept it and enjoy our short time with her. Needless to say we went home with shattered hearts and began to make peace with the fact that our beautiful little girl would fall apart in front of us then be gone forever.

When we got home we went to Stanford University and met with a Dr. hoping to get a Hematopoietic Cell Transplantation (HCT) transplant that we were told would slow her disorder and possibly stop it. The Dr's had her do a I.Q. test to determine whether she was eligible for the transplant unfortunately she was having a foggy day and failed there test, again we went home devastated and ready to give up.

Then a few days later we received a call from Dr Whalstrom at UCSF Benioff children's hospital he said he had heard about Rachel and wanted to help. Within the week we were at UCSF preparing for Rachel's Hematopoietic Cell Transplantation (HCT) transplant it went very well at first she was set to be discharged on October 25th 2016 but that day she started having huge fevers 101°-105° she had these fevers for about a month and half before they found the problem but by that time the fevers had taken there toll on her brain and body she could no longer stand, walk, sit up, or feed herself she is still very intelligent and can talk but has trouble forming words.

Rachel has come a long way since she was discharged from the hospital she has improved some, she can now feed herself finger foods and has regained some but very little movement and control.

Our main concern is making her happy and comfortable but cannot afford all the things she needs.

Send Rachel a messsage of support

“The situation with the Corona virus has made it increasingly difficult to pay bills and buy the things Rachel needs. Any help is extremely appreciated.”