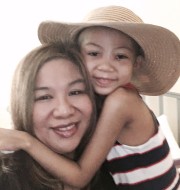 Welcome to Sophia’s Carelines page! Thank you for coming to support Sophia in journey of recovery. Here you can:

June 2016 Update:
My now 7 year old Sophia was diagnosed in July 2014 with Severe Aplastic Anemia (bone marrow failure where she is unable to produce red blood cells, platelets and had no immune system to fight off infections).
Sophia did not have a sibling match and had ZERO related and unrelated matches on the national bone marrow registry because she is of mixed race decent. Patients have a higher chance of matching someone that shares their ancestry.  Asians and mixed races only make up 4% of the national registry! Awareness in the community is important and changing these statistics is something that we can do. Although we held many bone marrow and blood drives, we did not find a match. #DiversifyRegistry
We came to NIH for a groundbreaking HaploCord Hematopoietic Cell Transplantation (HCT) Transplant Clinical Trial in November 2015. She had multiple surgeries for a rare aggressive infection while in the ICU for 58 days fighting for her life. She is now 135 days post transplant but still has a long road to recovery.
As a single mother (whose FMLA expired on transplant day!) any amount can help! Thank you in advance for your support!
Sophia is an Aplastic Anemia warrior, Hamilton Super Fan and #FutureBroadwayStar and #FutureDoctor!!!