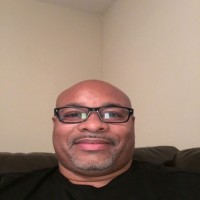 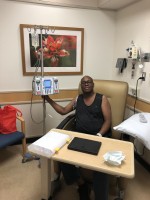 Welcome to Warren’s Carelines page! Thank you for coming to support Warren in his journey of recovery. Here you can:

My Name is Warren Griffin. I was diagnosed with CML no more than 3 weeks after I moved here to Houston. Texas. I was very sick and didn’t know what was wrong with me at the time. After running a battery of tests, and a have a bone marrow biopsy, it was determined at that time that I indeed had the Philadelphia gene.

I was put on chemo pills (Gleevec) at that time which did a great job. In fact, I even went into remission. But as time went on my body got used to the drug and another had to be administrated. Well, several years later, in 2012, another biopsy was done and it determined that the Leukemia created a mutation of some kind.

We needed to change drugs again to combat that stubborn disease, so Sprycel was introduced. Still not getting any better, I decided to seek another hospital for a second opinion. When I got there, my new oncologist (Houston Methodist Hospital) shared with me that the biopsy shows scarring within the marrow itself which is not good.

She took me off the (Sprycel) and put me on (Synribo, an injection that I was giving myself twice a day; 14 day cycle).

She also told me that if we can get you levels stable enough, I should think about a Transplant. I stood up from my chair and said WHAT? I was told in 2006 that transplants for this disease was mostly not available for adults at this time. Well she informed me that technology and medicines are now available for me at this time. Well you know what I said…. LET”S GO FOR IT!!!!!

Well, the transplant team got ahold of me, scheduled another biopsy (which I have had 16 since 2006), to make sure I I was stable enough and my levels were at the guidelines to continue. I was also informed that my name would be put into the donor pool at that time to find a donor. Being African American, I was told that it would time some time due to my heritage.  I told her that it was not going to take that long. Low and behold, 6 weeks later, we found a good healthy match! Praise God once again!!!!!

I was admitted and had the transplant on the day scheduled. Stayed I the hospital until September 25,2018 but was readmitted due to high fever.

I have since been released from hospital and now currently resting at home. I cannot tell you how extensive this process has been and I hope I have given you some further knowledge inside of this journey.

The outpatient visits of 3 days a week, long hours there and still getting my health back on track will take almost 1 year.

However, with the high cost of copays, prescriptions, and other medical care needs, I have fallen extremely behind on my household obligations. The income I have coming in is barley meeting the needs of my obligations at this time and I am seeking further assistance anyway I can to stay afloat.

Therefore, if there are those out there who can contribute something towards my cause, it will be very well received and used for the purposes I have stated above.

My plan after my care is to go back to the hospital and be a Volunteer to those who are going through what I already went though. Our doctors and nurses are just the cover of the book. They can only give us a baseline theory of what you will go though.  Hearing it from someone who has been though the process can give extra information in any way to help the patients while there in the Hospital getting ready to go through what I have been though. The inside of the book always has more Info….

Thank you for visiting my One-to-One Fund.

the Bone Marrow & Cancer Foundation’s One-to-One Funds are designed to support patients through this difficult transplant journey. Thank you in advance for your support. All gifts are tax deductible.