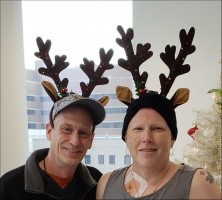 Since my last update, Kristin has continued with her Consolidation treatment. She is on the tail end of two weeks here in St. Louis at Barnes Jewish that began with her 4th Bone Marrow Biopsy on February 5th. We were able to enjoy the outpatient status while we waited the 5 days for the results. We had a great time exploring St. Louis, beyond the hospital, with visits to the Science Center, Planetarium, Art Museum, and Aquarium. Her biopsy results were encouraging once again. Negative on the Minimum Residual Disease test, 0% Blasts on the Leukemia Flow Pathology, and clear of any new genetic mutations. In other words, she remains in a chemo induced remission and will complete the remaining Consolidation cycles before moving on to the Maintenance Phase of her treatment plan. We will learn more about exactly what this phase will involve after she finishes up her next and final Consolidaiton cycle. While a Hematopoietic Cell Transplantation (HCT) Transplant is still a possibility at some point in the future, her doctors feel the the Chemo Only protocol will keep her in remission for an extended period of time.

HiDAC Cycle #3, which began on the 11th and will wrap up tomorrow morning, has hit Kristin a bit harder than the first two cycles. She needed her first transfusion of this cycle on Day+2, and has been generally exhausted. She is starting to see the cumulative effects of the chemotherapy, but her body is still holding up remarkably well.