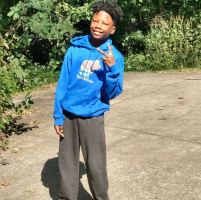 We were released on Monday. June 6, which was day 35. It was a late afternoon, early evening release that almost didn't happen. Sunday night he had a pain episode that was reminiscent of a Sickle Cell pain crisis. He was screaming and writhing and complaining of back pain. They got his pain under control within about thirty minutes or so, but, experiencing pain like that is exhausting. It's as of he ran a marathon and worked a twelve hours shift right after. His little body was so tired but his anxious mind wouldn't let him sleep. He kept saying he wasn't ready to go home and that he wanted to stay in the hospital. He literally sat up in the bed all night distracting himself with his phone. Believe me if he could have slept he would have the boy was beat. He finally went to sleep after they came in for his morning weight, which as about 4:30am. Surprisingly, when the doctors rounded, they were still planning on discharging us! However, after consulting with his dad and my mom, I decided to tell them we would stay one more night. However, after seeing how hard and with such vigor he was sleeping, finally, I just couldn't do it. I knew that this little body needed some reeeeeeaaaaallll sleep. Like, for a day.....no interruptions for vitals every three to four hours, no beeps, no random lights, just peaceful sleep. So as he began to stir and wake a little, I sat down and told him we were leaving. He could see I meant it and there was no way around it, so he finally agreed.

We got home that night and he was a little anxious, but he slept well and woke up bright eyed and bushy tailed ready to take on a productive day of video game play. All he had to do was get his morning meds out of the way, which ended up ruining his game play plans because someone gave him twice the dosage amount of  a schedule III appetite enhancing drug for chemo patients (basically weed) on accident, sending him high into the clouds and off to sleep. Yes, the some one is me and yes I felt horrible, at first. Once it kicked in, he started telling me how he was feeling and that his " brain wouldn't give him peace" and how " we are just tiny specs in the universe but we still do activities " oh, and the room was spinning. Once I was on the phone with the hospital to report the symptoms, I heard myself speaking and it clicked, he's high! I was mortified! I immediately pulled out the med list and saw that he was getting 2, 2.5 mg pills in the hospital ( we had been " rooming in" for a week while still inpatient, which means I administered all his meds during that time and I got used to it) but upon discharge he was only supposed to take one pill because he was prescribed 5mg pills. It was an honest mistake, and he will never forget me breaking the news to him....I started out with " First off, I love you very much and we all make mistakes" ......he eventually understood and went on explaining the mysteries of the universe to me as he giggled and ate Hershey bars inevitably drifting off to a very deep, very long nap.

We go to clinic in Nashville at Vanderbilt, 3 times per week. He needed a transfusion on our first visit due to his hemoglobin being low and he needed platelets on our second visit which was much quicker. As we get closer to our 100 days, he will need less and less blood products to eventually needing NONE, soon thereafter. This is something that we both look forward to.

At home I've got all his medical supplies (heparin syringes, line flushes, Hickman line dressing kits, feeding pump, formula for feeding pumpand feeding pump bags) all nicely organized in his bedside drawers for easy access. I decided to keep the feeding tube cause he wasn't really ever eating consistently and things still just don't taste right to him right now. So we do feeds overnight to maintain his nutrition and hydration.

That's it for now.